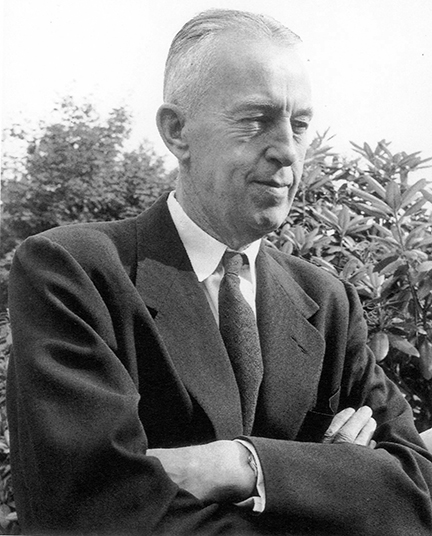 In his role as co-founder of Alcoholics Anonymous, Bill Wilson was by far one of the most influential people of the 20th century. In creating this program, Bill has been instrumental in literally saving the lives of millions of people across the globe and created a transformative, universal support system for those in recovery. The Twelve Step program he and Dr. Bob founded continues to do the same in the 21st century.

Bill’s story starts with his birth in East Dorset on November 26, 1895, in the Wilson House, his paternal grandparents’ hotel in East Dorset, Vermont across the street from the train station He lived nearby for the first five years of his life. The family then moved to Rutland, Vermont, until his parent’s divorce in 1906. That same year, his mother made the decision to go to Boston to train as an osteopath. She left Bill and his younger sister Dorothy with her parents in their East Dorset home across the street from the Wilson House. The grandparents’ home, complete with Bill’s second floor bedroom, is part of the Wilson House property and open to the public.

Bill spent a happy childhood and adolescence in and around East Dorset. He hunted small game, fished in small streams and at nearby Emerald Lake, and learned to play the violin. His grandparents had the means to send him to the then-private high school, Burr and Burton, a few miles away in Manchester. He was class president, captain of the baseball team and played lead violin in the school orchestra. From this, one can perhaps gain an early glimpse of Bill’s drive to be the best at everything he did. During his senior year, following the death of a young woman with whom he was in love, he suffered his first bout with depression, which delayed his actual graduation for a few months following commencement exercises. While nobody could foresee what was to come, Bill Wilson went on to become the most consequential person ever to graduate from his high school alma mater.

When Bill attended Norwich University in Northfield, Vermont, he frequently returned home to spend time with his grandparents. This is a pattern that would continue for the rest of his life. He and his wife Lois, who had her own connections to East Dorset, visited for extended periods of time every year. This was home. Naturally, when Bill died, he was buried here.

Today, East Dorset remains the small town of Bill’s childhood. The main street still contains most of the tidy colonial homes he walked among for so many years. . Stately Burr and Burton Academy, nearing its two-hundredth year of operations, and where Bill spent four formative years, is a stop for any visit. Emerald Lake, where Lois’s parents owned a summer cottage, is a beautiful Vermont State Park. The East Dorset Cemetery where Bill, his mother, sister, grandparents, and his wife Lois are buried in a family plot, is just a couple of minutes away and a pilgrimage for most Wilson House visitors.

Bill Wilson’s soul resides at the Wilson House, where he was born, where his work continues, and which remains at the heart of the town he never really left. Just as the Wilson House gave birth to Bill W, it remains a life-giving refuge for those in recovery. You will feel welcome, and leave enriched by the experience of your visit.

Constructed in 1852 for Ira Cochran (1810-94), a locally prominent entrepreneur, the hotel that later became known as the Wilson House was the first motel in the village of East Dorset. The construction of the hotel occurred during the same year that the Western Vermont Railroad came through the village, traversing the southwest quadrant of the state between Rutland and Bennington, connecting in those town to interstate lines.

Sitting on a site across the street from the depot, the newly constructed hotel was in a prime location to reap the rewards that the new railroad would bring to the area. The building itself, however, was already outdated in design while it was being built, featuring an eaves-front orientation that was more typical of the early 19th century Greek Revival style, rather than the Italianate architectural features that had already taken hold, particularly in larger towns and cities.

“An inset map of East Dorset village appears on the Bennington County map published by Rice and Harwood in 1856. The hotel is identified as simply the East Dorset Hotel without specific ownership. The opening of the railroad lead to great expansion of the local marble industry, which Ira Cochran was directly involved with, as he had developed a steam-powered marble sawing mill at East Dorset around the same time as the hotel.

The next proprietor of the hotel was Blake Barrows (1807-81), which seemingly gained ownership partially through his marriage to Ira Cochran’s daughter, Betsey (1817-1903). The following change of ownership also involved marriage, and brought the Wilson name to the hotel.

William C. Wilson (1840-85) married Helen E. (1843-1927), daughter of Blake and Betsey Barrows and acquired “one equal and undivided half” of the hotel property, paying $3,000. The hotel was then renamed to Wilson House. In 1895, Gilman Barrows Wilson, son of William and Helen, and his wife, Emily Griffith Wilson, while living in Wilson House, gave birth to a son in the present north parlor: the man who would “relate the building to an international social movement”, William Griffith Wilson (later known as Bill W.). After a few years Bill and his parents move first into a nearby house and then to Rutland, Vermont.

In 1899 the hotel was sold to Gilman Barrows Wilson, though he only held ownership for one year before transferring ownership of the property to a trustee. The title to the building was then reverted to a Manchester bank in 1900, later being bought by William Leary of Dorset in 1907. He retained ownership until 1920, then Stella and Thomas Ambrose acquired the property and renamed the hotel, the Mt. Aeolus Inn, a name that would persist for more than half a century. In late 1925 John and Florence Cunningham purchased the property from the bank, and operated the hotel for the following 21 years, until 1946.

The end of Prohibition enabled the Cunninghams to (re)open a bar in the hotel in 1933. Ironically, it was installed in the north parlor where William G. Wilson had been born. Wilson, by the early 1930s, was beginning his recovery from the alcoholism that had nearly destroyed his career and marriage during the latter 1920s. In 1935, he happened to meet in Akron, Ohio another native Vermonter and alcoholic, Dr. Robert Smith. Both members of the Oxford Group, Wilson and Smith subsequently formed a group specifically devoted to the disease of alcoholism, Alcoholics Anonymous. Reflecting the basic tenet of anonymity to encourage participation, the founders became known as Bill W. and Dr. Bob. Bill W. conceived the Twelve Steps to guide recovery from alcoholism, and wrote the basic book, Alcoholics Anonymous published originally in 1939. After the death of Dr. Bob in 1950, Bill W. became the paramount figure in the movement. A.A. subsequently burgeoned into an international movement with millions of participants. Bill W. died on January 24, 1971, and was buried at his birthplace, East Dorset, in the cemetery south of the village.

The last owners under the Mt. Aeolus name were Henry and Mary Holden, who operated the hotel for 29 years. The development of ski areas closer to Dorset’s southern neighbor, Manchester, as well as the discontinuation of passenger trains through the village and the moving of the main highway to bypass the village all led to the decline of the property. The physical condition of the property deteriorated, and it was only the link to Bill W. that ultimately spared the building the fate of demolition, as many other modest hotels in small villages throughout Vermont had experienced.

In late 1986, Albert (“Ozzie”) Lepper, a friend of the A.A. movement, discovered the deteriorating hotel, and then purchased it from Henry Holden in early 1987. Mr. Lepper were inspired to restore the hotel’s physical condition and reopen it as a tribute to Bill W. and a place of respite for fellow participants in the movement. The rehabilitation project began in 1987. The east block was in the worst condition; it required extensive structural and cosmetic repairs including the excavation of a partial basement, the construction of a new foundation, and the restoration of the first-floor kitchen and six second-floor guest rooms using existing materials wherever possible. The main block received equally thorough treatment; the bar was removed from the north room and it became the parlor, complementing the dining room and library on the main floor and the seven guest rooms plus bathrooms on the second floor. The exterior painting of the hotel in 1994 marked the virtual completion of the physical rehabilitation.

The hotel was reopened in 1988 under the historic name of the Wilson House. A non-profit foundation has been created to own the property, and volunteers serve to operate the hotel. Reflecting the guiding philosophy of the hotel’s management, A.A. and related meetings are held regularly in the former barn that has been adapted to meeting and lounge space. The Wilson House does not advertise to attract guests, and only a small sign hangs over the main entrance to identify the building.

Nevertheless, guests from throughout the United States and other countries find their way to Bill W.’s birthplace. Nearly one and one-half centuries after its original opening, the East Dorset hotel has been restored both in physical condition and in its historic function as a small village hotel. The latter status confers on the Wilson House special significance in Vermont as dwindling numbers of its type survive and continue in their original use. The Wilson House, therefore, constitutes an outstanding representative of the modest hotels that flourished in Vermont villages during the latter 19th- and early 20th-century period when railroads provided the dominant means of passenger travel for business, pleasure, and recreation.